Kidnap survivor thanks women who helped keep assailant behind bars 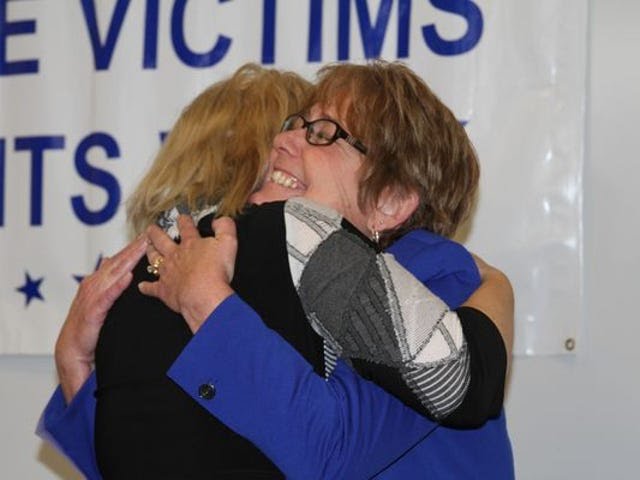 A Livingston County woman who was kidnapped and tortured for hours in 1993 was able to publicly thank two women who helped keep her kidnapper behind bars.

On Wednesday, Wendy Morrison assisted Prosecutor William Vailliencourt with presenting plaques to Michigan Department of Corrections staffers Holly Lea and Kelley Gonsler, who advocated in 2014 to keep the man sentenced for kidnapping Morrison in prison.

Vailliencourt also recognized Morrison, who works with the Michigan Domestic and Sexual Violence Treatment Board to help other victims have their voices heard, and Brighton Police Detective Michael Arntz for his work on an armed-robbery case that led to the suspect receiving a prison sentence of 37-75 years for armed robbery at two Livingston County gas stations in 2014.

"There's no words," Morrison said following the prosecutor's Above and Beyond Award Ceremony luncheon, which was held in the jury room at the Judicial Center on Highlander Way in Howell.

"It's really been an eclectic collection of divine intervention. It's like a cosmic mess came synchronized at the right time, and it continues," she said. "What does it feel like? I feel like it's healing; it's helping me to heal on levels I didn't know I needed to. It's empowering me."

Morrison told the luncheon guests: "Don't ever think for one moment that the difference between making a left turn and a right turn doesn't change the course of your life. It can."

The theme of this year's event was Engaging Communities and Empowering Victims, and it was held to coincide with National Crime Victims' Rights Week.

Morrison's nightmare began in August 1993 when she drove home from work at a Novi restaurant. She turned onto Pleasant Valley Road and was less than two miles from home when a stranger ran her vehicle off the road.

The man abducted her at gunpoint and held her for several hours. At one point, Morrison's assailant "played Russian roulette with a loaded gun and pulled the trigger" while he held her captive, Vailliencourt said, noting that a judge called the man a "raving animal."

The assailant was caught hours later that same horrific night after he had returned Morrison to her home. Once inside, she called 911 while he fled. Unbeknownst to him, however, then-Michigan State Police Trooper Greg Michaud, who is now a captain with the department's forensic sciences division, and other investigators were processing Morrison's abandoned vehicle just down the road from her home.

The assailant eventually entered a plea to multiple felonies, including kidnapping, armed robbery, sexual assault and using a firearm during the commission of a felony. He was subsequently sentenced to 25-60 years in prison and he was preliminary approved for parole in 2014 when Morrison reached out to Lea and Gonsler, both of whom advocated on Morrison's behalf.

Their efforts paid off when the parole board reversed its preliminary decision to release the assailant and instead denied him parole. The man's maximum parole eligibility date is July 2044.

Vailliencourt said Lea and Gonsler were recognized "for empowering Wendy and making sure her voice was heard."

"It was a unique case," Lea said as she smiled at Morrison. "You're a strong woman. I'm glad your voice was heard."

Vailliencourt said Arntz spent numerous hours in a four-day span in March 2013 investigating three armed robberies — one each in Brighton, Green Oak Township and Oakland County. The suspect concealed his face, but Arntz viewed store surveillance videos and was able to match the suspect's clothing in the videos with clothing found in the suspect's vehicle.

Arntz also spent hours listening to the suspect's jailhouse phone calls in which he tried to intimidate witnesses in an effort to manufacture an alibi. In the end, Arntz's work led to the suspect's conviction in both Livingston and Oakland counties, and he was sentenced to prison for 37-75 years and 25-50 years, respectively.

"One of the most important ways to honor and protect victims is to hold those who victimize our citizens accountable for their crimes and to help prevent them from creating more victims in the future," Vailliencourt said as he announced Arntz's award.

Arntz's law enforcement career began 12 years ago with the Eastern Michigan University Police Department. He came to the Brighton Police Department in 2007 and was promoted to detective in 2013.

Arntz has received 24 department commendations, including officer of the year in 2011.

Artnz gave a shout-out to the Green Oak Township and Novi police departments as well as the Michigan State Police and Bureau of Alcohol, Tobacco, Firearms and Explosives, which participated in the investigation.

"I'm accepting the award," he said, "but there's a lot of hard work from these other agencies that made it happen."